After the Tsunami in Indonesia of in December 2004, Vernon Collis represented the Western Cape Government as sustainability expert to aid with reconstruction of Nias Island in 2005. Also on the trip were representatives from member regions of the Network of Regional Governments for Sustainable Development (nrg4SD) countries, the Indonesian Government and some of the main global development agencies. 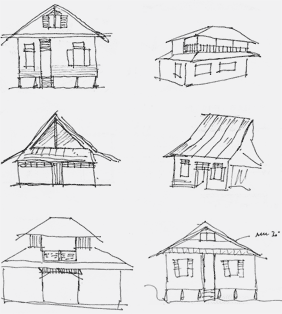 Their intention, through partnering with governments in the South, was to transfer the knowledge of the North to (from their perspective) the less knowledgeable and needier South. Time on the project revealed to Vernon Collis, the limits of modernity and technocracy to the innate, yet vanishing knowledge of indigenous people.

Their primary approach was to fix what was broken, and to do so by, for example, making a stronger concrete house, or a wider road that would result in the demolition of beautiful old fabric and substantially alter the urban and architectural qualities. There was limited understanding of systems – ecological, economic and social, and there was limited planning for another earthquake or Tsunami.

Just a few days of real immersion on site, walking about, engaging with the locals and their building traditions revealed the richness of the existing resource base and the real possibilities for long-term independence and sustainability.

The rich and varied traditional architecture and urban environment are a complex and diverse realization of the local culture in built form.

Vernon Collis developed a series of maps. The first showed Nias immediately after the Tsunami and earthquake – a dependent island, devastated by natural disaster and reliant on external agencies. The second shows Nias through another lens, a resource rich island, filled with opportunity. The third paints a picture of immediate and medium term reconstruction, and the fourth, a long-term vision of independence and real sustainability.

The strategy for immediate and medium term reconstruction included a few key projects, one of which is described here: This involved the conceptualization of the island’s schools as future disaster management centres – they would serve as both evacuation centres and temporary hospitals; would be powered off the grid and would have satellite communication links. They would also serve as adult education centres, would be self-sufficient food wise, and would be built from local materials, using local skills, technologies and architectural traditions. In this way they would act as anchors and generators in each community, educating and demonstrating on a range of levels, and across the generations.